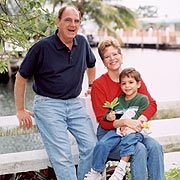 When my husband, John, was diagnosed with Lou Gehrig's disease last year, the neurologist said it was the worst disease he knew. He couldn't have fully prepared us. When months later John couldn't walk or eat or breathe anymore, it was like watching him being tortured by an invisible monster.

At a time when the nation is riveted by terrorism, my husband's death feels like terrorism of a different sort — not by a criminal organization but a biological enemy we know far too little about. Lou Gehrig's disease, or ALS (amyotrophic lateral sclerosis), is an incurable brain disease that kills an estimated 6,000 Americans every year; it paralyzes them until they no longer can move, speak, swallow or breathe. It attacks at apparent random. It's always fatal.

Scientists don't know why nerve cells in the brain and spinal cord start dying, how to stop it or why it attacks only certain people. More than 60 years after the death of Gehrig, the New York Yankees star for whom the disease was named, scientists still have no idea what the enemy is.

John had no family history of neurological disease. A former jogger, he didn't smoke or drink and rose at dawn to swim laps before work. He was a tall, confident guy with a big heart, a social worker-turned-public servant who had a passion for helping people. Though he was past 60, he had no trouble keeping up with our 6-year-old son, Patrick.

But just months after his diagnosis, John was so gaunt and disabled and anxious that he looked like a concentration camp victim.

The first sign of something wrong came just before Christmas 2002, when his left foot became tired while he was walking through the shopping mall near our Miami home.

His internist advised soaking the foot. The first neurologist he saw sent him to physical therapy. He got worse. By the time we found a neurologist who correctly diagnosed him months later, John couldn't lift his left foot anymore, and the muscles in that leg were wasting away.

Then there were the muscle twitches — tiny, involuntary explosions under the skin caused by the misfires of irritated nerves. As the disease advanced, the twitches multiplied, making his skin crawl. They drove him crazy during the day and kept him awake at night. It was as if his body were possessed.

John began to fall without warning. He bloodied his head on the patio at home, crashed in the elevator at work. He lived in fear that he wouldn't be able to get up or call for help. As his left leg grew weaker and the disease spread to the right, he was forced to rely on a foot brace, then a cane, then a walker, finally a wheelchair.

The one thing he never had was pain. I prayed for pain, prayed he really had a brain tumor or a different disorder that science could attack. We traveled to the Mayo Clinic seeking a different diagnosis, but the doctor there agreed with our own.

The neurologists seemed as frustrated as we were. There's no diagnostic test to detect ALS. John's doctor had to rule out everything else, then wait to see if the paralysis spread. The only drug the Food and Drug Administration has approved for ALS costs $920 a month at my local pharmacy if a patient lacks insurance. It doesn't stop the disease; it's said to slow the progression somewhat. Our insurance would have covered it.

But John couldn't fathom why anyone would want to extend the hell he was going through. He wouldn't take the drug.

As his left leg became dead weight, he couldn't play with our son or stand up in the kitchen to make himself a sandwich. Soon his abdominal muscles gave way. He reached a point where just getting bathed and dressed, even with help, exhausted him.

Sometimes I would find him alone, crying. "I've given up so much," he told me.

He had given up his job, his life outside the house, and any hope. I lay awake nights wondering whether I would be able to help him die if he asked me to.

Two months before his death, an ALS specialist said John appeared to have the slow-progressing version of the disease, and he might live five years. But ALS is unpredictable. Instead, it attacked his chest, killing the nerve cells that told his chest muscles to breathe. John's slow decline became a free fall.

He became dizzy one day at home and fell off the walker, striking his head so hard he had to be hospitalized. He never walked again.

The next time he came home, it was in hospice care with a hospital bed and an oxygen machine; he didn't have the strength to inhale. The next morning he was gone, a year after the first symptom in the mall.

Now I wake up every morning in the bedroom where John died and wonder why ALS chose him. The disease that wrecked our family was as random and terrifying as a sniper shot or a bomb blast. John is not the only victim: My little boy is angry and scared. He panics if I unexpectedly leave his sight, afraid Mommy will disappear, too. I'm haunted by memories of John's tears, by my inability to protect him.

If ALS were a terrorist group taking thousands of lives each year, this country would throw people and technology and money at it until we had won. Not so with this disease. There's no cure on the horizon, the doctors tell me.

It's like a terrorist in our midst, going strong.